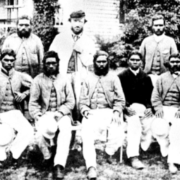 Just spotted a great collection of stamps just released by Australia Post to mark 150 years since the first Oz cricket team toured England. All Aboriginals, neatly enough, and they fairly scared the socks off the Poms.

Great stamps of the team; mainly mono images, one with the lads resplendent in red, white and blue. If you’re into things philatelic, you’ll love them.

All reminded me of a kids book I picked up a while back called Boomerang and Bat. It was put together in memory of one of the team, a bloke called Bripumyarrimin. Mighty cricketer in his day. One of Australia’s best. Buried in England, after succumbing to tuberculosis while on that famous Aboriginal cricket tour in 1868.

Also known as King Cole, he was one of that extraordinary team initially coached and captained by Geelong’s Tom Wills, same man came up with Australian rules football. The team surprised the life out of England’s toffee-nosed cricketing aristocrats.

Smacked them all over the shop then put on corroborees, whipcracking tricks, close-up stunts belting away cricket balls thrown en masse, somersaults, tumbled backflips and threw demos with their spears and boomerangs. Johnny Mullagh, Unaarrimin, was the star of the team, carting the Poms all over the place.

Wills’ role is remarkable for the fact his father was slaughtered in the largest massacre of whites by Aborigines, five years earlier. But Wills had grown up with Aborigines and his 1866 job leading the team around Victoria and New South Wales, while a natural exercise for him, was often controversial to many colonials who saw Aborigines as savages.

Wills was widely considered the best cricketer of his time but he’s not Geelong’s only claim to fame from the era. When Australia’s first Test team played England at the MCG in 1877, it included batsman Bransby Beauchamp Cooper, a cousin of the great W.G. Grace. He’d migrated to The Antipodes in 1869.

Cooper, a gentleman, eschewed anything resembling hard work. He refused to practise, deeming it a form of slavery, and demanded professional cricketers do the hard work of bowling and fielding. Oddly enough, he didn’t mind wicketkeeping.

Well-credentialled after playing with Grace’s teams in the 1860s in England, he later beat Grace’s team while playing for Victoria, with a personal knock of 84. Playing at South Melbourne in the 1870s, he drew such a large crowd that visiting tightrope sensation Blondin said Melbourne “had gone mad with cricket”.

Cooper worked at Queenscliff as a customs officer, dying in 1914. He is buried at Eastern Cemetery in plot CEO/6/48 if you’re curious.

I’ve had my orbs running over another book, too; Parachutist at Fine Leg, by Geelong scion and cricket encyclopedia Gideon Haigh. Veritable treasure chest of weird cricket tales. Like Sid Barnes’ 1948 jab at an umpire when a dog ran onto the field after an unsuccessful appeal: “Now all you want is a white stick.”

And South Africa’s exit from the field in Sydney 1995 after player Symcox was pelted with golf balls, fruit and a stuffed barbecue chicken. Then there was the sparrow killed by Indian bowler Jahangir Khan at Lord’s in 1936 which landed against the wicket, without dislodging the bails.  And in 1982, British customs found a consignment of bats from India  that had been hollowed out and filled with cannabis.

It’s not just the game, the old cricket. So I discovered some years back, at Barwon Heads, when a visiting circus elephant grabbed a cricket ball with its trunk after a batsman belted a four.

You’d think it happens all the time in India. You’d think maybe the pachyderm was trained and could throw it back. Nope, he just scoffed it, quick as look at you. Burp.

But my favourite cricketing yarn has to be Tarpot from that Aboriginal team toured England way back when. He could run 100 yards backwards in 14 seconds.