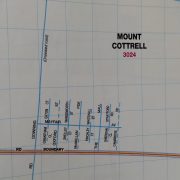 Chartwell: It looked an impressive housing estate. On paper, at any rate. There was Oxford Street, that first-rate London shopping thoroughfare. And Mayfair Avenue, after some of the most expensive real estate in London.

There was Downing Street, for the British prime minister’s residence; The Mall, for the Horse Guards Parade and the thoroughfare leading to Buckingham Palace; Finchley Court, after the seat held by Maggie Thatcher.

Who wouldn’t want a piece of this real estate? Back in the mid-1980s, there certainly were people who wanted in. Mind you, the property was a bit out of the way, plonked as it was on the outskirts of the Shire of Melton at Mount Cottrell. Well north of Werribee, south of Rockbank and, well, a long from anywhere.

But it was Woop Woop with ambition. After all, the subdivision was named Chartwell after the family residence of Winston Churchill. A name that also assumed some Ponzi prominence in Geelong a while back. To the best of this scribe’s knowledge, however, it’s no relative. Mind you, there do appear some rather similar problems.

The folks who invested in this Chartwell soon found the development wasn’t entirely to their liking. Basic infrastructure — roads, gutters, footpaths, water — failed to come through and before they knew it their precious blocks of land were little more than dust-bowl sites stranded in yet another of the many failed residential subdivisions dotted across the state.

Still, a handful forged ahead and built their homes, sans facilities they’d earlier anticipated, and today a small clutch of long-established houses can be found at this particular Chartwell.

But they’re few and far between and the streets and courts and avenues that were obviously intended to become a suburban idyll never quite made it there. Roads are still unsealed and facilities thin on the ground, notwithstanding a CFA station you’ll find the Melways has sited squarely in prestigious Mayfair.

For unassuming Melton, it’s another connection with the illustrious Churchill of Chartwell. An old aeroplane that sat for many years on a farming property north of the township was reportedly used to fly the British statesman to the Yalta conference with Roosevelt and Stalin in February 1945, where the Big Three tried trying to figure out the governing of post-war Germany.

A fight-flight metaphor might be applied to those who invested a pile in the Churchill pile here in Geelong — about the governing of their post-Chartwell finances.

That’s Chartwell Enterprises, of course, not the Chartwell estate where, among the streets, you’ll also find a Wandsworth St. Wandsworth, incidentally, is where the largest prison in London is situated.