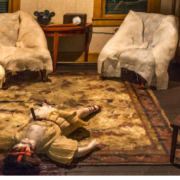 Don’t know if you’ve heard of the Dolls House Murders. Odd little story I read about the start of modern forensic science in the US. Yanks were late to the table as proper murder investigation bucked a good many vested interests.

Heiress Frances Glessner Lee poured buckets of cash into Harvard to get a decent forensic system going, along the way producing some 18 tiny dolls-house crime scenes for tyro detectives to seek out important evidence and clues.

This was the 1940s, yonks after other countries had their own forensic systems – indeed Harvard’s lecturers had to be sent OS to get a few clues. US detectives slowly became more Sherlock Holmes-like; very slowly, took decades. Bruce Goldfarb wrote a curious book about it recently, 18 Tiny Deaths.

These doll houses struck me as curious because a Geelong sleuth fan, and one-time head of the Aussie Sherlock Holmes Society, Derham Groves, oversaw a swag of similar slaughterhouse miniatures.

Groves had 40 architecture students at Melbourne Uni bludgeon, garrot, hang, maul, poison, shoot, stab and strangle a bunch of Ken and Barbie dolls. He then set them to work designing an Australian Crime Centre. It’s good fun, architecture. No wonder my young bloke just got into it.

Odd, too, that Sherlock Holmes author Conan Doyle, was inspired by a Scottish bloke, Joseph Bell, who removed a spearhead from the rear end of Geelong’s George Morrison.

Morrison, son of Geelong College’s founder, had been attacked in New Guinea. He was working as a journo with The Age, which was racing The Argus to be the first to cross New Guinea south to north.

Ridiculous, really, but those were the days. Morrison was a prodigious walker. He trekked Australia, north to south, just 20 years after Burke and Wills. Made out it was easy but he was in considerably better country much further east.

Any wonder there’s a shortage of local workers and growers rely on dummies from overseas who don’t know any better. Or that COVID’s been a hell of an inconvenience.

But eight bucks might actually be good pay. Media reports say other pickers are paid as little as $3 an hour. The Australian Workers Union argues there’s widespread wages theft and is chasing the matter through the Fair Work Commission.

Yet the growers say they just can’t understand it, reckon there’s up to $500 a day to be earned.

Rather than utilise an unemployed casual workforce unable to access JobKeeper, and COVID transmission fears notwithstanding, they somehow talked the Government into letting some 1500 Pacific islanders into the country as pickers.

Too little too late, of course, for much of the fruit but it seems one season’s losses aren’t too big a sacrifice to make for longer-term cheapskate security.

No clear insight, either, on just how much the islanders might earn. Too bad for them they’re not tennis players, cricketers or actors.

Talk about returning to the scene of the crime. Can anyone else smell something that stinks to high heavens? Like a fair old kick in the Kanakas for the anti-slavers.