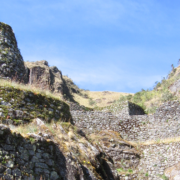 MACHU PICCHU: The wraiths slide down the cliff, clinging to the blue mossy granite, slinking toward the eerie stone structure that is Phuyupatamarka.

Chilly tendrils of mist reluctant to give up the earth, they whip down and over its ancient concourse, scrubbing it with a ghostly ether. They then race up the yellow grassy headland towards me.

The tendrils launch themselves at me, enveloping my throat, my arms, my body, and whispering threats I can’t understand. I freeze as they race past me toward a soaring cliff’s edge and more interlopers who have invaded their ancient enclave.

In the rarified air of the Andes, 10,000 feet above sea level, the ghosts of the ancient Inca kings are reminding me they don’t like visitors. Or so I think. Suddenly, an updraft, born far below _ a mile below, in a small town anxious to scrawl its destiny in the sand _ shatters the icy fingers and blows them to the four winds.

Maybe it’s the lack of oxygen but my imagination’s running riot. It’s been like this for days as I trudge past rocky ruin after beautiful rocky ruin, in the cloud forest of Peru’s High Inca Trail.

Looking down at faraway Aguas Calientes, I wonder if the vapours stalk its townsfolk too, mistaking them perhaps for shades of the marauding Spanish man-horse beasts who whipped the Incas into submission with arquebus, religion and disease 500 years ago.

Not all of the Incas succumbed, though. Learning of the slaughter at Cuzco and elsewhere, and fearing their own, many withdrew to the faraway reaches of the mountain jungles.

The most famous of their abandoned hideways is where I’m headed. The lost city of Machu Picchu. Spirits willing.

Discovered in 1911 by a professor from Yale, Machu Picchu is hard to get to. Five days by foot across stony frozen passes, along vertiginous crevasses, past brightly-coloured wild orchids, in the shadow of serrated snow-capped peaks, suspension bridges, wild rivers.

The trail is beautiful going but tough. Treacherous rocky paths and staircases — one foot wrong and you’ll do an ankle, knee or worse —  are constant pitfalls for the unwary. I limp in, up and over the Inti Punku/Sun Gate ridge, knees considerably worse for wear.

It’s little wonder the wicked Pizarro brothers never found Machu Picchu. Outsiders would only ever find it by accident, which is exactly how Hiram Bingham did so a century ago.

In 1911, Machu Picchu was an overgrown ruin Bingham mistook for Vilcabamba, believed the last stronghold hideaway of the Incas. His stunning find sent an electric shock through the world of archaeology.

The day I arrive, it’s still red-hot _ a favourite in a huge world-wide 100-million vote for the New 7 Wonders of the World. The place is buzzing with hundreds of tourists pouring over the site, 2350 metres above sea level.

Down in Aguas Calientes celebrations are in full swing. Cusqueno beer, pisco sour cocktails and cachasa caiparinhas you might drive your car on are all disappearing fast. Raucous Santana riffs are stripping the lurid paint from the town’s walls, so too the village brass band and classical music blasting from the town square’s stage. Even builders are dancing on the church roof.

I get back up the mountain by 7am to beat the rush, which I do by about 10 minutes.