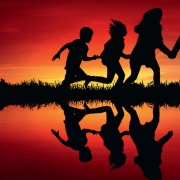 Takes a fair leap of faith to convince yourself the premise for this story might reasonably be able to happen. It’s far-fetched and unrealistic but if you think people like Ivan Milat and Bear Grylls can exist then the leap into its treachery, cruelty and heroics isn’t so difficult.

That said, the plot’s a fast-paced affair about an American orthopaedic hotshot, Tom, in Melbourne as a conference keynote speaker. His two kids are badgering him to find some koalas in the wild. They drag him and Heatherm his young second wife – the first died from an unusual fall down the stairs – off to ‘Dutch Island’, out in Westernport Bay just spitting distance from the mainland.

Despite multiple warnings and ominous comments, they insist on driving across the private property in search of the native herbivorous marsupial. But Tom hadn’t been able to get the top-line Porsche Cayenne hire car he’d ordered and he’s sooking in a slightly cheaper Porsche.

So when a deaf cyclist fatally jumps out in front of him as he’s speeding across the island, it’s all the car’s fault. Didn’t have the accident avoidance system he’d ordered. The island’s hillbillies, the dead girl’s in-laws, don’t buy it for a second. But they’re happy to let Tom off the hook for the lazy half million he offers.

And the deal’s going swimmingly, until the dead girl’s husband fronts up and starts shooting. Tom cops it and after a nasty half-strangled incarceration Heather and the two entitled brats manage to hit the track. It’s 100 degrees in the shade, water nowhere to be found, the kids are whinging their precious butts off, the landscape’s rough scrub offering no shelter and a veritable scourge of drunken, shotgun-wielding uber-bogans are hot on their tail.

At this point, we’re moving into spoiler alert territory so clear out if you like but I’ll try not to wreck things wholesale. What you probably want to know, apart from the ending – which I’m not exposing, I’ll leave that little surprise for you – is that this game of cat and mouse turns very nasty. Inventively nasty, too. The atrocities will appeal to those of a horror genre bent.

The guerrilla warfare that Heather and the kids cook up, despite various ridiculous frustrations from a German couple also on the run, is cunning, courageous, lucky and for the main part effective. It drives a thrilling, action-packed narrative that will keep you flicking the pages faster than you really should. There are curious things to learn in the quieter moments.

Mind you, one or two encounters just aren’t right. Up there with the pantomime-level “He’s behind you!” stupidity. Why the editors didn’t rein these in is anyone guess but they’re flaws that undermine an almost, almost, possible story.

There’s also some mile-kilometre, Fahrenheit-Celsius explanations, obviously for dumb Yanks, that just grate. And for Aussies reading about a former prison island at Westernport called Dutch Island, well, that’s equally weird. Why not just call it French Island? No-one’s going to tie you to a bed of red-ants … if you’re lucky.