It’s the number one environmental problem facing the world. Prodigious scientific minds and colossal budgets are being invested in tackling it but, to many people, the battle against man-made climate change seems almost unwinnable.

And yet a small clutch of scientists at Geelong’s Deakin University could be changing all that. Not through global political agitation or high-profile activism but rather with straight hard science coupled to some savvy business common sense.

Underpinning the team’s work is an extraordinary, little-known fact about reducing carbon emissions. This fact is, coastal and inland wetlands can be between 30 and 50 times better carbon soaks than trees.

That’s a serious game-changer.  One which, together with existing renewable energy breakthroughs and designs – plus growing sustainability sentiment among consumer and investors – could very much assist a lasting solution to the problem of greenhouse emissions.

Think mangrove forests, seagrass meadows, tidal marshes, inland wetlands and even farm dams. All have key potential for sequestering millions of tonnes of carbon in the campaign to reduce carbon-driven climate change.

According to the Deakin Blue Carbon Lab, Great Barrier Reef mangrove and seagrass catchments alone hold more than 111 million tonnes of carbon, around the amount produced by 87 million cars a year. Get your head around that figure and you can see the potential in plans like restoring the former saltpans at Avalon north of Geelong and livestock-mangled saltmarshes along the Bass River at Western Port.

It’s just part of a program to counter coastal wetlands around the country lost to human intrusions like floodgates, roads, bunds/levees and culverts cutting their natural tidal flushing. Extensive fish and avian nurseries have gone to God, likewise broad tracts that served as protection against erosion, storms.

Sounds heavy but there’s an optimism, a humour, even old-style home remedy approaches, underpinning the Blue Carbon Lab’s assault on climate change. Take its teabag research, for instance. It might be just one of the Lab’s many pursuits, part of a 30-country project from Phillip Island to the Himalayas, and Svalbard to Argentina, but you’ll find its doctors, and fellow researchers, on video up to their knees in swamps and even drinking pots of tea underwater to highlight the work tracking carbon breakdown with old teabags.

This is not about demanding change so much as being the change. The idea has resonated with the Federal Government, which last year tipped $30 million towards to restore mangrove and wetlands, support programs in Pacific developing countries and stump up a carbon accounting system. It’s not the answer but it’s a start.

The Blue Carbon Lab’s been running since 2016 under the inspired leadership of Peter Macreadie. 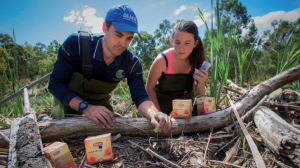 It’s part of Deakin’s School of Life and Environmental Sciences and its Faculty of Science and the Built Environment.

Professor Macreadie is very pleased to see that Australia’s coastal wetlands – often regarded as the “armpits of the coast” – are finally being recognised as important weapons in the fight against climate change.

“This feels like the ugly duckling story my mother read me as a child, where the apparently ‘ugly duckling’ turned out to be a beautiful swan,” he says.

“Australia has just released a method that will allow blue carbon credits to be awarded for the first time in Australia. This is a significant milestone for Australia as it offers a financial mechanism to pay for the costs of restoration of coastal wetlands. We’ve destroyed about 8 million football fields of coastal wetlands, so the there’s a lot of work to do.

“There’s also a sense of irony to all this: these wetlands created fossil fuels in the first place, and now we realise that they are key to our future efforts to remove atmospheric carbon.

“But I don’t want to give the impression that blue carbon is a silver bullet for climate change. There is no silver bullet – we need an arsenal of weapons. But what makes blue carbon unique is that it delivers exceptionally long-term carbon drawdown. Ironically, these are the same ecosystems that created fossil fuels in the first place.”

Prof Macreadie says that Australia is well positioned to capitalise on blue carbon opportunities. And also that we should appreciate these ecosystems for their many other benefits to our lives and livelihoods, which include their:

“The 2022 announcement of a blue carbon crediting program under Australia’s multi-billion dollar emission reduction fund should be seen as the beginning, not the end,” Prof Macreadie says.

“We still have a way to go with operationalising blue carbon projects in Australia. This means translating a decade of blue carbon science into policy and practice.”

The good thing is, the more the Blue Carbon Lab’s efforts make economic sense, which they clearly do, the sooner it’s all likely to happen.

Swanning around at Fyansford
Scroll to top