CURIOUS to see events of recent weeks down around the old Fyansford paper mill. Explosives purportedly damaging a water race, a fire at Baums Weir, an airlift rescue after a hiker fell over the race’s waterfall, excess flow down the Barwon supposedly flushing platypus from their Bunyip Pool habitat …

Place’s getting busy. And lockdowns have introduced many people to parts of the river they didn’t know. Has to be a good thing, you’d think, provided it’s not abused and people who’ve worked as its carers for many years will be understandably interested, maybe anxious, about what these incursions might mean.

There’s talk of new tracks east of the paper mill, on the river’s north side, a push to repair the mill’s water race and start a charity-driven tourist heritage trail, a footbridge over the river upstream of the weir and a clear need for something safer than the slippery goat track on the south side.

Beautiful spot, of course, and the jumping-off staircase and lookouts at Buckley Falls are exceptional. But some people seem less than pleased about the prospect of opening the river to further traffic. And the notion of someone blowing up the paper mill’s old water race has grown a few more legs, of sorts. 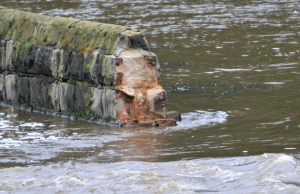 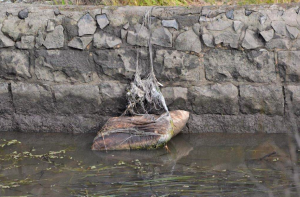 Rod Morrison lives in one of the new estates that have popped up in Fyansford. He’s a regular hiker along the river, both sides. Likes photographing the place as well as the herons, egrets and other wildlife he finds. When he heard of the damage to the 145-year-old mill’s water race wall – stopping flow to the mill falls and introducing new flows to the river – he grabbed his camera.

“Using my 150-600 lens, I was able to obtain close-up shots of the breached wall, plus a mystery ‘sandbag’ hanging from the empty water race,” he says. “Two days after taking the photos of the breach, I walked up there again and discovered that the sandbag had mysteriously disappeared.

“It was definitely not in the shallow water below where it had been hanging from the wall. It appeared that someone had removed it. I subsequently emailed photos of the breached wall, and the empty channel where the sandbag was hanging from, to a friend who is a retired SAS major and who has done a couple of tours in Afghanistan.

“He is most experienced in using explosives and also making up various explosive devices. He could not give a definitive answer; however, he did advise that it was ‘suss’ and appeared that a small explosive device may have been used to breach the wall.

“He also advised that the sandbag that had been hanging from the wall may have been used for a second explosive device that failed. He went on to state that a sandbag plus the water around it would muffle an explosion from a small charge.”

Rod Morrison’s been a member of the Rotary Club of Highton for 22 years. He says the timing of the race wall damage is suspicious. When the wall was breached, there was very little flow in the Barwon and still water in the mill race and its entrance.

Shortly before that, the club came up with the idea of conducting tours starting and finishing at the paper mill. It lodged it with the city’s Environment Department. Idea’s pretty simple. Walk folks down to the weir, recounting history and stories along the way – old quarries, various mills, Indigenous stories, William Buckley, that sort of stuff. End it with a coffee, and all the proceeds go to local charities.

But, as Rod says, in order to have the spillway at the old paper mill flowing again, the race needs to be cleaned of its reeds, weeds, dead tree branches, silt and rubbish. Detractors, meanwhile, say the river proper needs the water. Others again have suggested to me that the river’s adjusted to the race over the past 145 years and recent high flows may have flushed platypus from the pool below Buckley Falls closer to the mill. 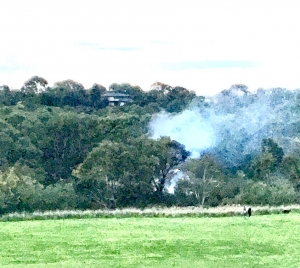 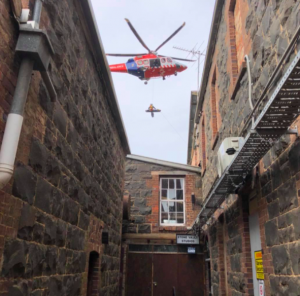 I won’t pretend to be any kind of hydrology or environmental authority but, while the Barwon’s foot traffic grows, there’s another problem not getting much traction in the heavily degraded Moorabool River flowing into it a few hundred metres downstream from the mill.

Authorities promised to sort out its flow and other issues between here and Ballarat best part of 20 years ago. The upshot today? Nothing good. Matters are as bad, if not worse, with some 90 per cent of its flow reportedly removed for drinking water and farm use before it hits the Barwon.

Bit like someone threw a bomb in the whole thing.

This article appeared in the Geelong Advertiser 21 September 20212